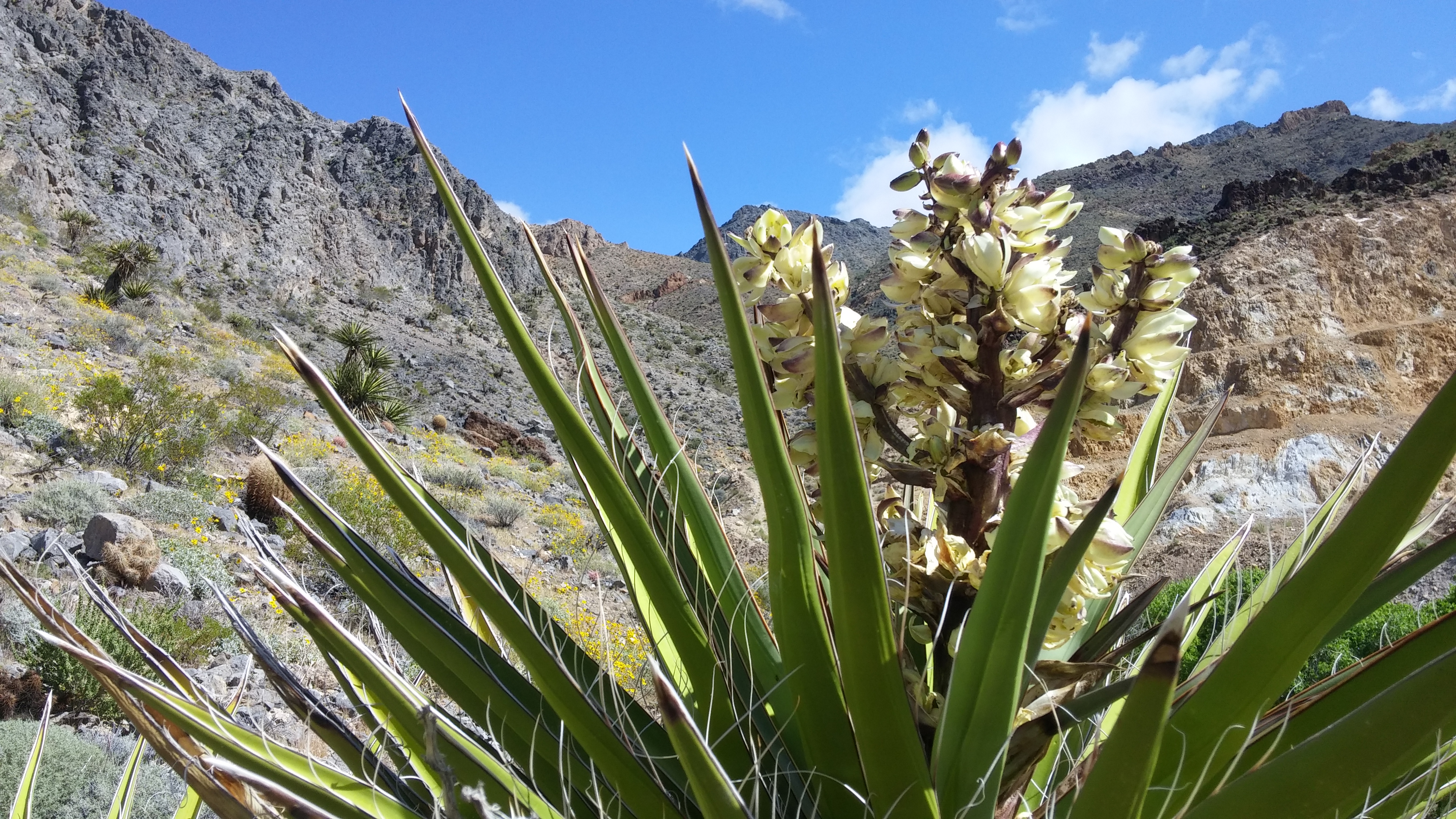 Located in northeastern San Bernadino county in Eastern California, the Kingston Range and Wilderness partially drain into the Amargosa Basin. The 7000+ ft peaks rise in the distance to the southeast of Shoshone and Tecopa.

Though there are many ways to access the Kingstons, we approached from Tecopa, past the turnoff to China Ranch and continuing up into the California Valley – a section of proposed National Conservation Lands that would help tie together a great amount of desert habitat. 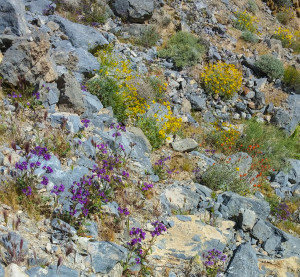 The road is reasonably well maintained, and for most of the year a passenger car could make it over Tecopa Pass – though this all depends on how much and how recently it has rained. To be safe, a little clearance and some good tires can be helpful. We approached from the west, heading for a large drainage near the north end of the range.

As the road climbed, the plant life diversified, so that yuccas started to peep up above the creosote. Coming off the alluvial fan and more into the mountains, the hillsides exploded with all kinds of plant life: barrel cacti, acres of blooming brittlebush, several types of yucca, sage, cheesebush, hedgehog cactus, cholla, prickly pear, and loads of wildflowers.

Our first stop along the road was Crystal Spring, but as soon as we got out of the car it was not the green riparian area that we were drawn to, but the density of the cacti on the adjacent hills and the wildflowers tuck 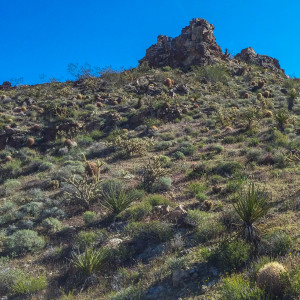 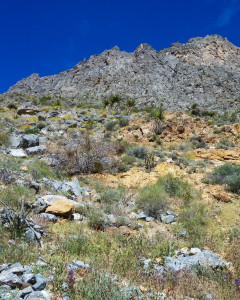 n between the shrubs. Drawn by a bright paintbrush, we soon found budding cacti of all sorts – sure to be a sight to see in the coming weeks. Interestingly, the hill behind us (to our north and west) held a clearly different cohort of plants compared to the site we were standing on. While both featured many of the same cacti, this side was dominated by woody shrubs, a variety of grasses, and significantly more cholla and barrel cacti. The other was more open, though at the moment dominated by the flowers of brittlebush, phacelia, and globe mallow. The Yuccas stood out taller, and while the cacti were still present, this side featured more prickly pear and the barrels, hedgehog, and cholla were much less dense. This difference is all likely due partially to the southern vs northern exposure of the two slopes, but even more so to the difference in substrate. The north side was composed of limestone with a calcerous soil, while the south side was made of granite. Much of the central massif of the Kingstons is in fact granite, and the range boast some billion year old rocks. 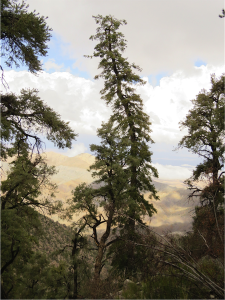 Continuing up the main road, the community continued to change with elevation. The Kingstons boast two really interesting plants in their higher elevations: stands of white fir, and giant nolina. The white fir are quite remote and require some scrambling and wandering to reach, but the nolina are quite accessible… and GIGANTIC! Giant nolina can be found in several American deserts, but these ones are uniquely large. Also their blooms are out of this world. Sorry for all the excitement and cliche, but really, they’re amazing. Go see them. 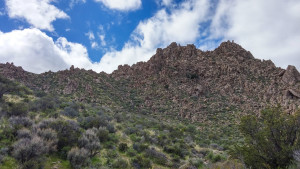 The turnaround point of our quick expedition was Horsethief Spring, just over the top of Tecopa Pass. It has an old cabin and a large riparian area, and apparently is the favorite place of the raptors of the Kingston Range. We saw a nesting hawk (possibly a Cooper’s but I only had a brief glance), and a pair of owls! I’ve only ever seen an owl in the wild once and that was at dusk and quite difficult to see. This was the middle of the day (albiet cloudy)! They were both quite timid and only allowed about a 5 second glance before flying away to hide further in the trees. They had the cute, curling ears of a Great Horned Owl, but seemed a bit too small to me, so perhaps a long-eared owl.

While most of the Kingston Range lies within the Kingston Mountain Wilderness area, the corridor we were on is not wilderness. A mining operation is in service along the road. There are also some grazing allotments in the area. Nonetheless, it doesn’t take much away from the wild nature of the place. There is definitely a lot of potential for exploring – and perhaps finding a banded gila monster!