Visit the Amargosa Basin – Crown Jewel in the Mojave Desert 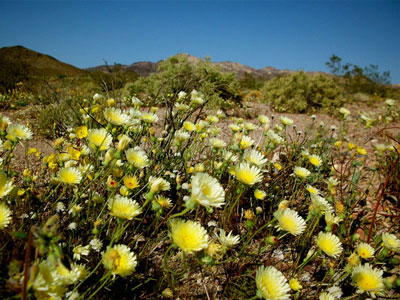 The Amargosa River is over 175 miles long and often is called the “hide and seek” river because of its inclination to travel underground, occasionally resurfacing to create lush oases surrounded by a harsh dry desert environment. Theses oases are isolated from one another, and, as a result, each one provides unique habitats for species that are found nowhere else in the world except along this desert river. Overall there are approximately fifty of these unique species such as the Devil’s Hole pupfish, the Speckled dace, the Amargosa toad, the Ash Meadows gumplant and the Amargosa niterwort. These series of lush springs also support riparian bird species such as the Least Bell’s Vireo and the Southwestern Willow Flycatcher both federally listed as endangered species. Birds listed by the state of California as Species of Special Concern such as the Yellow Warbler, the Yellow- breasted Chat, the Vermilion Flycatcher, and the Virginia Warbler are also found in the area simply because of the string of lush oases amidst the desert landscape. 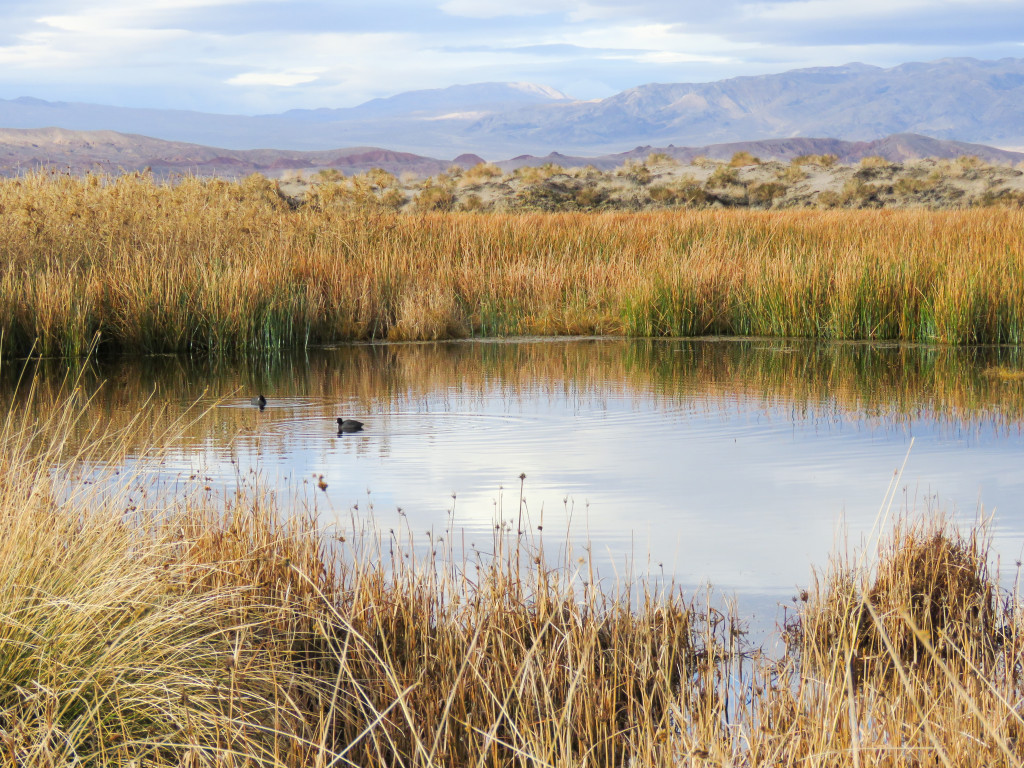 The rich riparian resources that support a wide variety of plant and animal life also attracted early man to its banks as evidenced by sleeping circles, shelter caves, geoglyphs and an abundance of mortars and pestles, scrapers, pottery shards, and projectile points. Much later explorers such as Kit Carson, John C. Fremont, and Brigham Young ventured into the area. In 1829 Antonio Armijo established the Old Spanish Trail, which brought a constant flow of visitors into the Amargosa region. Prospectors traveling west to the California gold fields heard rumors that the mountains surrounding the Amargosa river contained silver, gold, lead, copper, and zinc treasures, and by the late 1800s the area was flooded with prospectors seeking their fortune. The area continued to be an active mining district until the 1980’s. In 1906 the Tonopah and Tidewater Railroad was constructed along the banks of the Amargosa to carry borax to markets from the rich borate prospects in the region. The train continued to operate for another thirty years serving as an important source of transportation for the region. 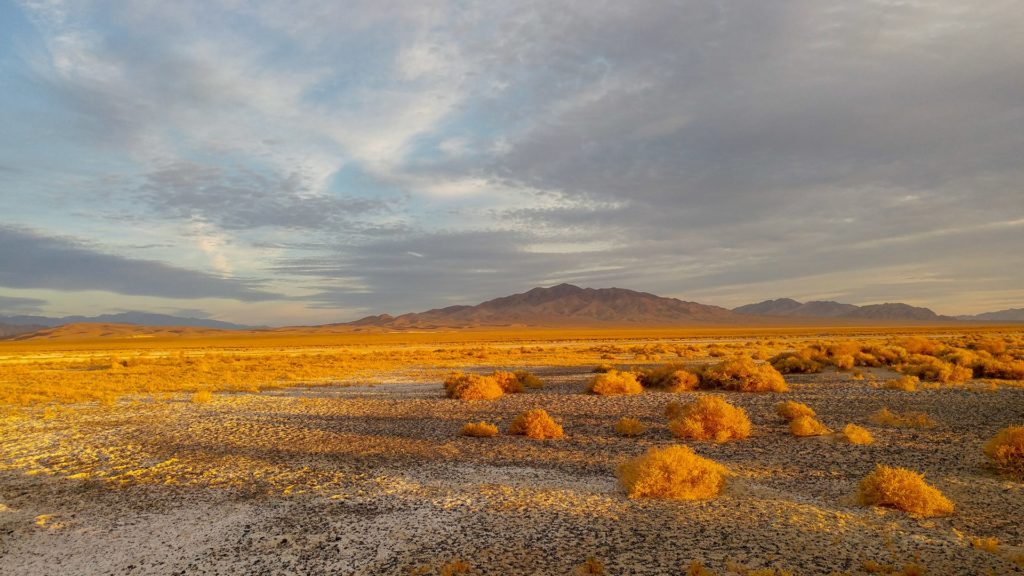 Although the rich resources of the Amargosa region were known and appreciated by many residents, visitors and government officials alike, the area was not given protective legal status as part of the California Desert Protection Act of 1994 as was the Death Valley National Park to the north and the Mojave Preserve to the south. Although wilderness areas were created near the Amargosa, such as the Funeral Mountain Wilderness, the Ibex Hills, the Kingston Range, and the Nopahs, the Amargosa Valley itself was again overlooked. Except for the areas of Ash Meadows and the Amargosa Canyon, the river and its oases themselves were left unprotected. Even more damaging was the fact that the river was still often seen as fragments and not as a system.

In March 2004 a group of residents and others who were concerned about the Amargosa and its communities met to address these concerns, and after much discussion the group came to the conclusion that a locally based conservancy would be the most effective way to address these issues. By July 2005 the Amargosa Conservancy was officially incorporated and funded. By March 2006 the Conservancy had adopted a simple but meaningful mission statement of “protecting the land, water and beauty of the Amargosa.” 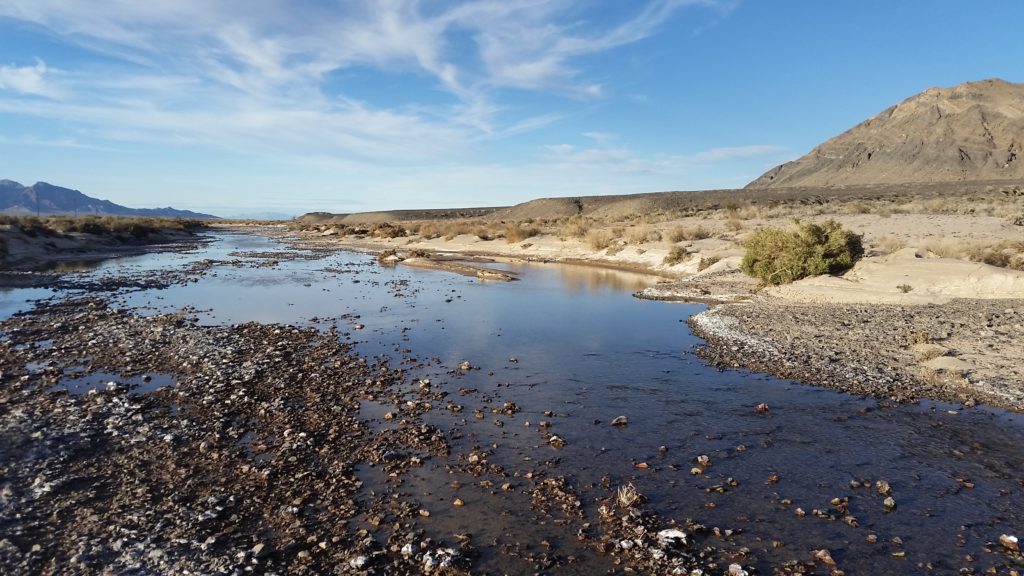 One of the concerns of the Amargosa Conservancy was to continue to pursue legal protection of the rich resources of the Amargosa basin. After several years of advocacy and working with national organizations that recognized the cultural significance and fragility of the Amargosa the Omnibus Public Lands Act sponsored by Representative Howard McKeon, Senator Barbara Boxer and Senator Dianne Feinstein was signed into law in March 2009. This bill designates the Amargosa as a Wild and Scenic River and, therefore, includes the river in the National Conservation Lands, a group of spectacular and culturally important landscapes administrated by the Bureau of Land Management which encompasses a system of national monuments, national conservation areas, historical trails, wild and scenic rivers and wilderness areas throughout the nation.

In addition to pursuing legal protection of the land the Amargosa Conservancy has made progress toward realizing its mission statement in other areas as well. The organization has collaborated with community and government agencies on such issues as water monitoring and land use. The Amargosa Conservancy also has partnered with the Bureau of Land Management, the National Fish and Wildlife Foundation and several other organizations to control tamarisks along the Amargosa River.

Because of the efforts of this partnership hundreds of acres of tamarisk have been removed in riparian habitat along the river saving from 150 to 350 gallons of water a day per tree that the invasive tamarisks would have sucked up. This water now remains in the river as seeps, pools and streams. In addition the Amargosa Conservancy has acquired 160 acres located at the headwaters of Willow Creek, which flows into the Amargosa River in Amargosa Canyon. Old Tecopa, a historical site in the area, also is located on this property. 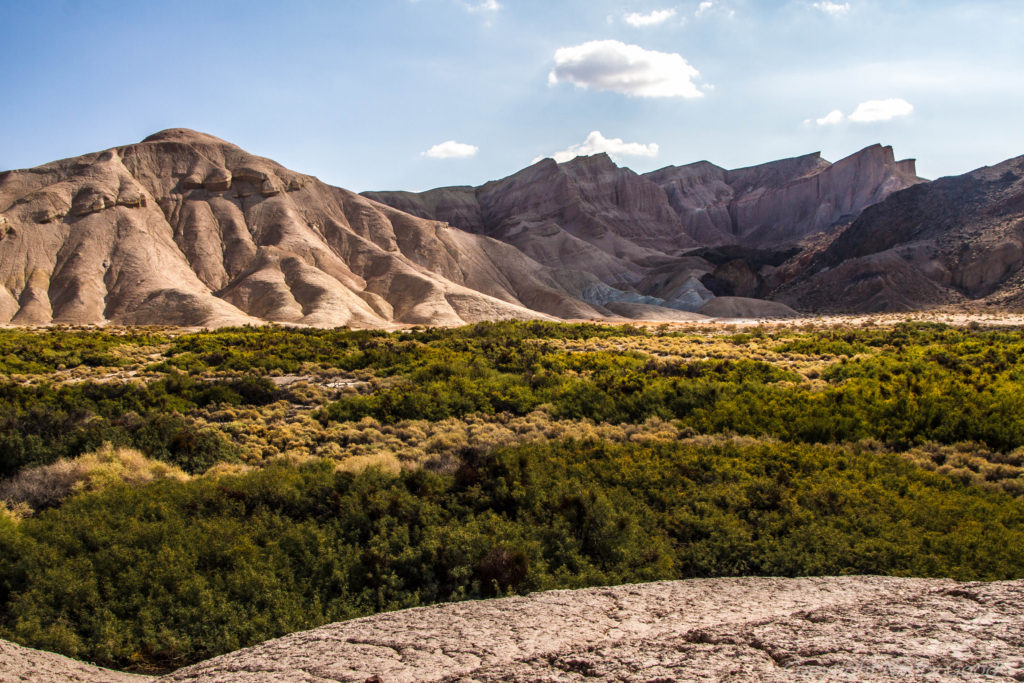 Willow Creek and the Amargosa Canyon, soon to be protected.

Protecting the beauty of Amargosa

But one of the greatest successes of the Amargosa Conservancy has been the continuing progress toward the goal of partnering with organizations in the Death Valley and the Amargosa communities to support economic sustainability that protects the land, water and beauty of the Amargosa. Through a program of talks, field trips and other events, the Amargosa Conservancy has been able to encourage tourism, which supports the economy without destroying the land. In fact it is the special beauty of the land that is creating our economic base. We invite you to visit the beautiful Amargosa basin, a crown jewel in the Mojave Desert.