Who is the Timbisha Shoshone Tribe?

The people of the Timbisha Shoshone Tribe were formerly known as the Panamint Shoshone Indians of Death Valley.  The Panamint Shoshones were best known for their fine basket making skills.  Baskets had many uses, such as for boiling water, trapping birds and carrying food.

The Panamint Shoshones would move from the valley floor 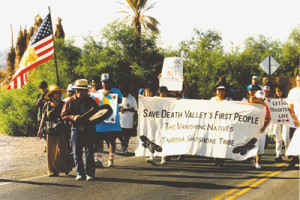 into the mountains during the summer months, then return for the winter.  Traditional brush homes were easy to construct.  The Timbisha Indian Village was created in 1936.  Nine adobe homes, a trading post and wash house were built.  This helped to bring about the end of the Shoshone traditional way of existence.

Although the tribe received federal recognition in 1983, it did not receive a land base.  The Death Valley National Monument was expanded in 1994 when it became Death Valley National Park due to the California Desert Protection Act.  Fortunately, the tribe was successful in getting an amendment added to the act.  Section 705 (b) ordered the Secretary of the Interior to work with the tribe and other relevant agencies to identify lands suitable for a reservation for the tribe; lands both with in and outside the park.

Seven years after the passage of the California Desert Protection Act on November 1, 2001, the Timbisha Homeland Act was signed into law.  This bill authorized the Secretary of Interior to take into trust over 7,000 acres of land for the tribe.