Fishes of the Amargosa Basin 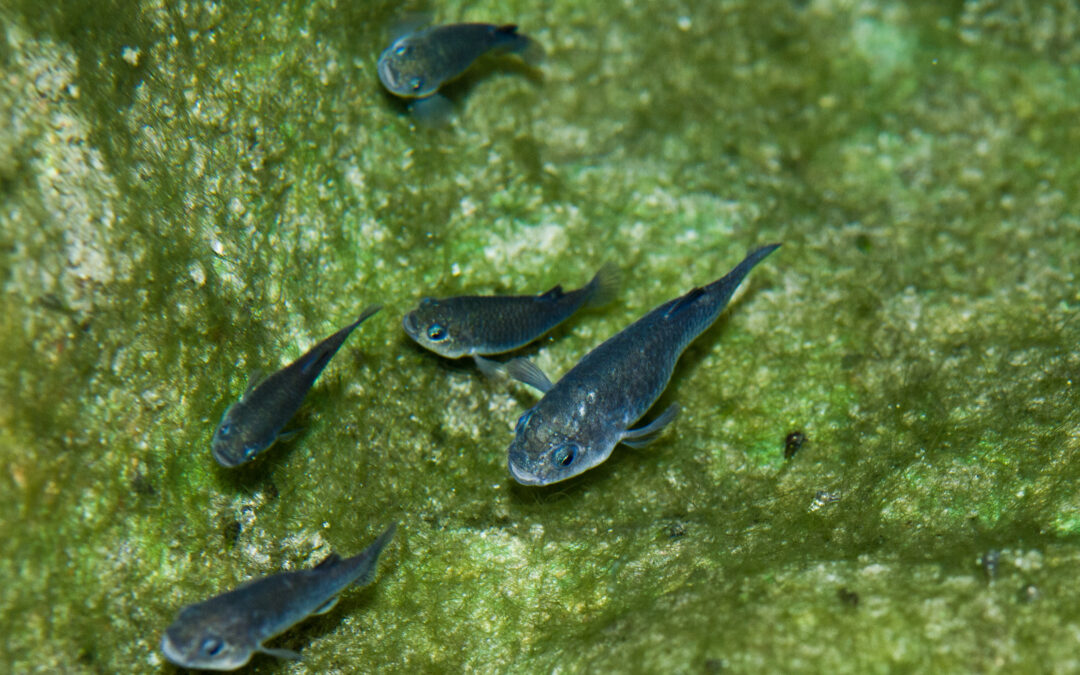 Before the Amargosa Basin was the hottest, driest place in North America, it was relatively moist. Abundant precipitation during the Pleistocene (as recently as 10,000 years ago) filled the valleys of the Amargosa Basin with water, providing interconnected habitat for a variety of aquatic species including fishes, amphibians, and more. As the climate dried and heated up, the waters of this vast aquatic system receded, leaving only remnant aquatic habitat at the oases which make the Amargosa so special – Beatty/Oasis Valley, Ash Meadows, Shoshone/Tecopa, the Amargosa Canyon, and assorted springs in Death Valley.

The fish which inhabit these oases became isolated from their closest relatives, and over many successive generations, they speciated, becoming highly specialized to the waters they inhabit. Each spring possesses a unique temperature and geochemical regime, and a unique food web, creating equally unique species of fish.

And thus it came to pass that the Amargosa Basin is blessed with no fewer than nine species or subspecies of pupfish (eight extant), three distinct populations of speckled dace, and formerly four species of poolfish (only one extant and not in the Basin).

The pupfish are certainly the most famed aquatic residents of the Amargosa Basin, primarily due to the extremophile Devils Hole pupfish (Cyprinodon diabolus), which lives in a disjunct portion of Death Valley National Park, in a bottomless cavern full of hot water. But there are so many more. Ash Meadows has two other species of pupfish, the Ash Meadows Amargosa pupfish (C. nevadensis mionectes) and the Warm Springs pupfish (C. nevadensis pectoralis). All three of the Ash Meadows pupfish are protected under the Endangered Species Act. 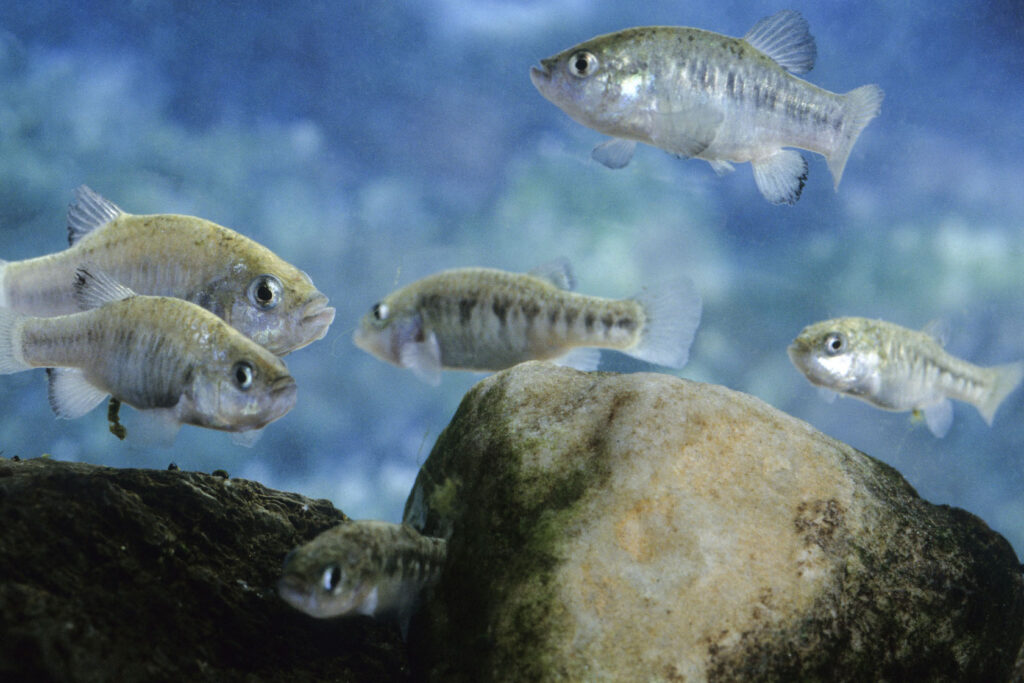 Down the river is the now-famous Shoshone pupfish (Cyprinodon nevadensis shoshone), rescued from near-extinction by Shoshone’s owner, Susan Sorrells, and now thriving at refugia at Shoshone Spring. While the Shoshone pupfish has no permanent conservation protections in place, Ms. Sorrells and numerous agencies have worked very hard to secure a future for this rare fish in the beautiful town of Shoshone.

Click here to check out this episode of the 90 Miles from Needles Podcast to hear the full story about the recovery of the Shoshone pupfish!

Tecopa is sadly home to the only extinct pupfish in the Amargosa Basin, the Tecopa pupfish (Cyprinodon nevadensis calidae). The Tecopa pupfish has the unfortunate distinction of being the first species protected under the Endangered Species Act to be delisted due to extinction. It was last seen in the wild in 1970, its habitat hopelessly degraded due to significant alteration of the thermal spring systems in Tecopa. Down the river toward its terminus, Death Valley National Park is home to three further taxa of pupfish, the Saratoga Springs pupfish (Cyprinodon nevadensis nevadensis), the Cottonball Marsh pupfish (C. salinus milleri), and the Salt Creek pupfish (C. salinus salinus). Each of these lives in isolated spring systems and have uniquely adapted to incredibly harsh conditions of heat and salinity in Death Valley.

The speckled dace (Rhinichthys osculus) is a polyphyletic species of small minnows that live in isolated spring systems across the Great Basin. The Amargosa River hosts three distinct populations of speckled dace, one each in Oasis Valley near Beatty, Ash Meadows, and the Amargosa Canyon. The Ash Meadows population is currently protected at the subspecific level under the name R. o. nevadensis.

The taxonomy of the Amargosa Basin speckled dace is much debated, and the exact conservation status of the Oasis Valley and Amargosa Canyon populations is in question. The Center for Biological Diversity petitioned the US Fish and Wildlife Service to protect the Amargosa Canyon population under the Endangered Species Act in 2020, however the petition was denied due to a lack of taxonomic clarity. It may in fact be that all three populations are the same subspecies (R. o. nevadensis) and are in fact already protected under the Endangered Species Act. It’s just not clear.

One fascinating sidenote: genetic work on the speckled dace has revealed a shocking degree of connectivity up and down the Amargosa River. The Amargosa Canyon population of speckled dace appears to be an admixture of genetics from the Oasis Valley and Ash Meadows populations. Meaning that, in unusually large flood events, speckled dace surf the waves of the Amargosa River all the way from Beatty to below Tecopa, a distance of nearly 100 miles. This implies a degree of interconnectivity in these populations not seen in the pupfish. Combined with genetic evidence from the Amargosa niterwort, we can infer that genetic communication between the oases of the Amargosa Basin is actually relatively commonplace, on an intergenerational time scale, and that enormous flooding likely contributes an important dispersal vector for some of our native species. 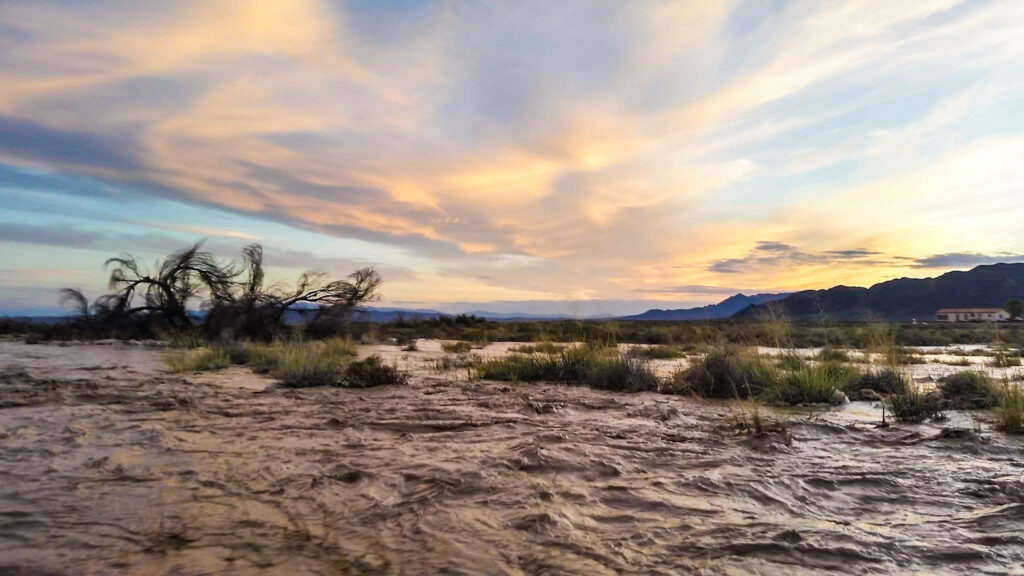 Amargosa River during the flood of 2015, Patrick Donnelly 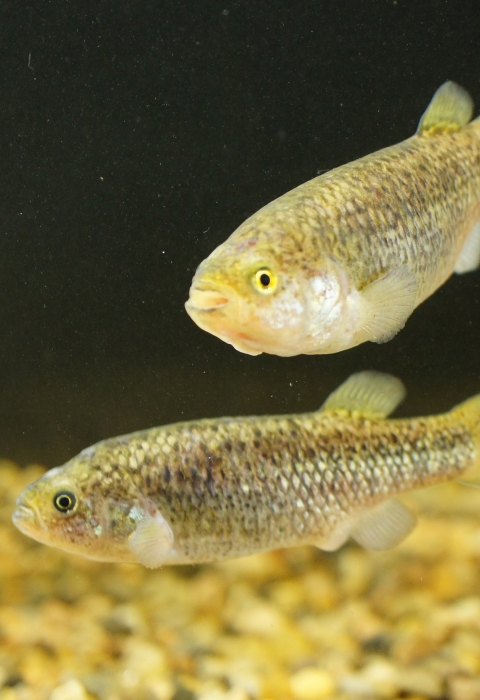 Due to habitat alteration and groundwater pumping, the natural habitats for the three Pahrump taxa were all destroyed, and two of the fishes went extinct (Raycroft Ranch poolfish and Pahrump Ranch poolfish). Thanks to some quick work by intrepid biologists at the US Fish and Wildlife Service and the Nevada Department of Wildlife, the Pahrump poolfish was saved from extinction, rescued before its habitat went dry. It is now “Nevada’s homeless fish,” and lives in a number of artificial refugia around the state including at Corn Creek, at the Springs Preserve in Las Vegas, and in Shoshone Ponds in Spring Valley in eastern Nevada.

The fishes of the Amargosa Basin tell us a fascinating evolutionary story about persistence and adaptation. They provide vital ecosystem functions in the spring habitats where they live. They are a living legacy of the ice age, providing a connection to the past. And they are an indelible part of the biodiversity of the Amargosa Basin.