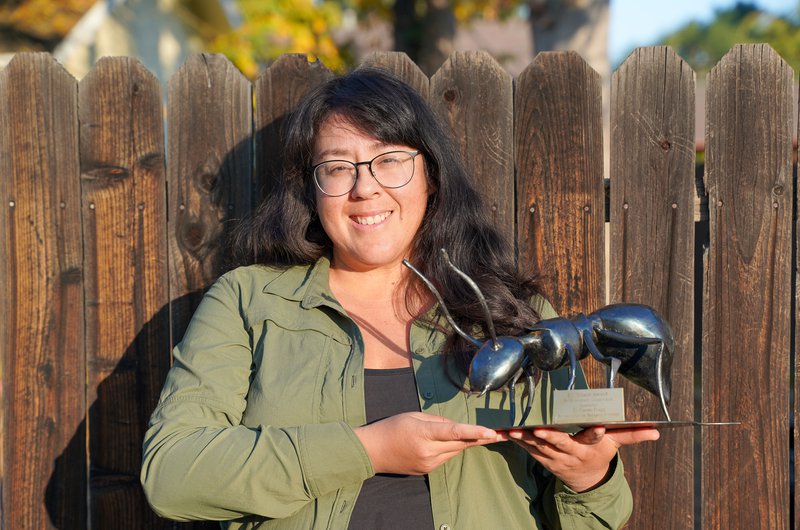 CLAREMONT, Calif.— A conservation botanist and director of conservation at the California Botanic Garden, Naomi Fraga, Ph.D., is the 2021 recipient of the Center for Biological Diversity’s annual E.O. Wilson Award for Outstanding Science in Biodiversity Conservation.

Fraga rose to international prominence because of her advocacy for the rare plant Tiehm’s buckwheat (Eriogonum tiehmii), threatened with extinction by a proposed lithium mine. She also engages in direct conservation, monitoring and habitat restoration of more than 30 other rare, threatened or endangered plants across California and Nevada.

“We’re thrilled to present this award to Naomi Fraga for her relentless efforts to document, protect and restore rare plants,” said Kierán Suckling, the Center’s executive director. “By taking a strong ethical stance on behalf of the conservation of Tiehm’s buckwheat, she’s been at the vanguard of the scientific community working to stop the plant extinction crisis.”

Fraga is a professor of botany at Claremont Graduate University in a dual appointment with the California Botanic Garden, where she received her Ph.D. and M.S. She has more than 20 years of field botany experience, in addition to leading a conservation program that includes habitat restoration, invasive species treatment, and species monitoring. She also oversees the largest conservation collection of California native plant seeds in the world at the California Seed Bank, with billions of seeds representing thousands of species preserved for future conservation activities.

The Center presents the E.O. Wilson Award annually to a scientist who has made an outstanding contribution to conservation. It is named after renowned scientist Edward O. Wilson of Harvard University, known as “the father of biodiversity.” Wilson’s career has focused on promoting worldwide understanding of the importance of biodiversity and the preservation of our biological heritage, and he is the world’s leading authority on ants.

“I congratulate Dr. Fraga and express gratitude for her heroic work to save rare plants and protect Earth’s diversity,” said Wilson. “Her advocacy for plants, which far too often are overlooked, is of utmost importance in abating the extinction crisis.”

Fraga’s advocacy for Tiehm’s buckwheat, as well as her work monitoring and conserving other rare plants such as the federally endangered Amargosa niterwort (Nitrophila mohavensis), have received widespread attention, most recently with a profile in Wired and a front page story in the Los Angeles Times.

She received the 2019 U.S. Fish and Wildlife Service’s Recovery Champion award for her work, which led to recovery of the Hidden Lake bluecurls (Trichostema austromontanum ssp. compactum). Earlier this year she was also recipient of the Center for Plant Conservation’s 2021 Star Award.

Fraga has also contributed significantly to the literature of plant taxonomy, including a notable revision to the taxonomy of monkeyflowers recently published in the Flora of North America. Her work has illuminated threats to numerous newly described species and is informing plant conservation work across California and Nevada.

“I am deeply honored to accept this award named after one of my all-time conservation heroes,” said Fraga. “Working in support of plants is a journey of gratitude. Rare plants like Tiehm’s buckwheat teach me about resilience in the face of adversity. Through science and advocacy, I hope that my work will lead to protections that will enable future generations to learn those same lessons.”

The award consists of a cash prize and a handcrafted ant statue by artist Anne Bujold.

The six previous recipients of the award were ornithologist and poet J. Drew Lanham for his work to make conservation more inclusive; Rebecca Hernandez for advancing sustainable renewable energy; the late Lincoln Brower for monarch butterfly advocacy; Aradhna Tripati for groundbreaking research on climate change; Tyrone Hayes for safeguarding people and wildlife from pesticides; and the late James Deacon for protecting freshwater species.

The Center for Biological Diversity is a national, nonprofit conservation organization with more than 1.7 million members and online activists dedicated to the protection of endangered species and wild places.