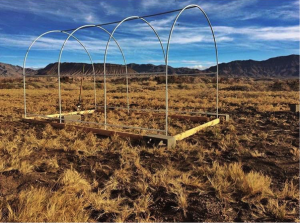 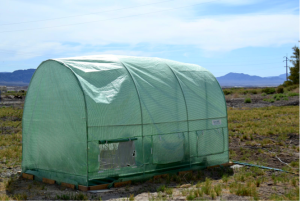 In late November of 2015 our Student Conservation Association AmeriCorps intern Abby Mattson set about planning a greenhouse nursery in which to grow native three square bulrush (Schoenoplectus americanus). In the long run, this cultivated bulrush would be used in habitat restoration for the endangered Amargosa vole (Microtus californicus scirpensis), which absolutely relies on this native plant as its food source and nesting habitat. But for the time being, Abby’s main concern was building structures able to resist the wind storms that routinely rip through the Amargosa Basin. After ordering a couple of greenhouse kits online, Abby focused on constructing a base that would reinforce the greenhouse and prevent it from blowing away. 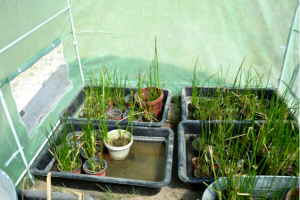 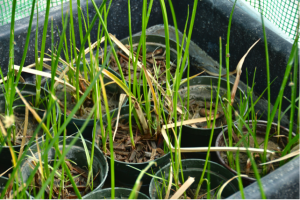 Finally, the greenhouse was ready to be a home. Abby and her partner in crime, Anne, harvested local bulrush, planting it in small plastic pots full of a combination of mud, fine gravel, and crispy dead bulrush. These pots were then placed into large tubs that would remain full of water, ensuring that the bulrush’s substrate was always saturated. The next step was to wait…. Sure enough, after a few weeks a few tiny new sprouts began pushing their way up through the mud. Soon, all the pots had doubled or tripled – the bulrush was thriving. 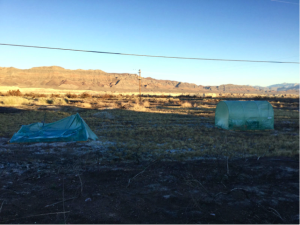 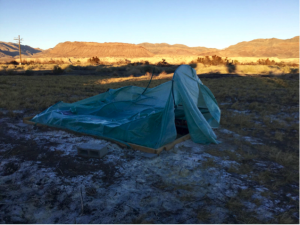 Just when everyone was feeling pleased with the growth of our greenhouse bulrush, one of those torrential wind storms decided to pass through Shoshone. Abby and Anne arrived back to the office after a day of removing tamarisk in the (also windy) Shoshone wetlands to find one of the greenhouses irreparably crushed. The bulrush in the obliterated greenhouse was quickly transferred to the whitehouse, nicknamed as such for its white framework. Luckily, the plants were completely fine – unlike plastic greenhouses, bulrush has actually evolved to withstand such harsh desert weather systems. 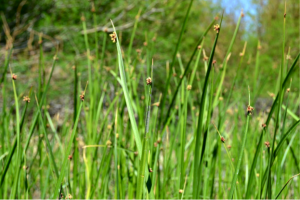 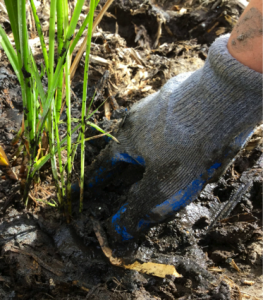 Come April, it was time to relocate the threesquare bulrush to its new home in Marsh 31, just down the road from our office in Shoshone. We hope that supplementing the already existing bulrush in the marsh will help to facilitate even more successful growth rates. Soon enough, all of this happily growing bulrush will be more than ready to house it’s furry friend, the Amargosa vole.